Professor Clive Ronson is a part of an international team of scientists that has just published a research breakthrough in the high-profile journal Nature.

The study describes the mechanism by which legumes, such as white clover, are able to tell helpful and harmful invading bacteria apart.

The research has implications for improving the understanding of how other plant and animal species interact with bacteria in their environment and defend themselves against hostile infections. 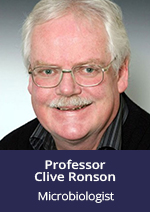