Professor Clive Ronson to be Head of Department

Professor Clive Ronson has accepted the role of Head of Department of Microbiology and Immunology, as of 1 October. 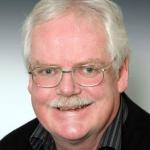 He replaces Professor Vernon Ward, who will be taking up the position of Dean of the Otago School of Medical Sciences.

Professor Ronson says he is proud to be taking on a department that is strong in both research and teaching and has excellent morale.

“Our department is in great shape thanks to the efforts of all the staff and students that have been involved in recent years. We’re doing important research that’s at the cutting edge internationally as well as being relevant to New Zealand’s needs, and we have a good record in teaching. The challenge is to continue this upward trajectory.”

One major area that he has highlighted as a priority for his 5-year term as Head of Department is strengthening the department’s capabilities in medical microbiology.

Professor Ronson’s own research area is the plant-microbe interactions that are involved in symbiotic nitrogen fixation, and the role of horizontal gene transfer in microbial evolution. He is an international authority on Rhizobium genetics and is a Fellow of the Royal Society of New Zealand. He has been with the department since 1991.