Associate Professor Peter Fineran has been awarded the Ross Crozier Medal by the Genetics Society of AustralAsia (GSA), to recognise outstanding contributions to the field of genetics research by a mid-career scientist.

The medal commemorates Ross Crozier, an Evolutionary Geneticist who was a past President and an avid lobbyist for the Society. The award is intended to assist the recipient in advancement of their career and will be awarded for work completed within the period five to 15 years from graduating with a PhD.

As this year's recipient, Associate Professor Fineran will speak at the 2017 GSA (Genetics Society of AustralAsia) Conference, which will be held in Dunedin from 2-6 July. He also has the honour of being selected as the Keynote Speaker at the CRISPR-2017 conference being held in Montana, USA next week, recognising him as an leader in CRISPR research. 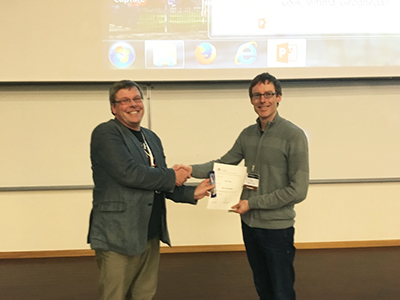 Peter is awarded the Ross Crozier Medal by Professor Peter Dearden at the GSA conference.