Professor Andy Mercer has been awarded the status of Emeritus Professor by the University Council.

He was appointed director of the VRU in 1993, a position he will continue to hold until he officially retires at the end of August. 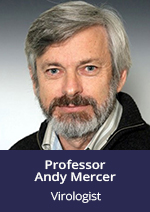