The Renshaw prize is awarded annually by the Otago Medical Research Foundation (OMRF), and is named after one of the founders of the OMRF, the late Dr P.K. Renshaw. The prize of $250 is awarded to the Summer Research Student who has made the most worthwhile contribution to medical research in that particular year. Alice’s winning research was titled How does mouse norovirus exit from cells? 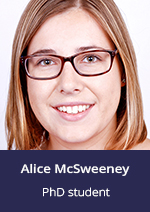